The future of TV is apps, according to Apple and today, in Australia this future seems to have become a reality. Today marks the day that the new Apple TV (4th Generation) has been released in Australia. If you are not aware, Apple TV is a digital media player that works as a small entertainment appliance that can receive digital content over the internet. This device is connected to your TV. It also allows you to stream content from your Apple devices (iPhone / iPad) to the TV screen.

So what’s new in the new 4th Generation Apple TV?

Well, firstly, you can customise your TV to not only include free and pay TV channels but also choose from a broad selection of apps that includes everything from games to travel accommodation services. Apple believe that the Apple TV isn’t just an upgraded set-top box, but it’s the first “true” TV that articulates Apple’s vision of what the TV viewing experience should be. The Apple TV has it’s own app store, so you can download as much content as your heart desires. There is also an ability to search for the content you wish to view across different providers. Searching will now tell you if the content is available through both iTunes and Netflix and lets you choose which service you want. The global search works only for iTunes and Netflix in Australia at this time.

Also the ability to play games on the Apple TV is a new feature made possible by Apple’s powerful A8 chip, and a  new remote control with an internal accelerometer and gyroscope. This means that when you tilt the controls and move it around in your hands things happen onscreen which makes gameplay very quick and responsive

Also, the new Apple TV’s Siri Remote allows you to issue voice commands to the inbuilt microphone in the TV remote control. Siri is able to respond to natural language requests such as “Find me movies with Nicole Kidman….”. The remote control doesn’t need regular batteries which is a bonus. Instead, you charge it by connecting the remote to your computer using the lightning-to-USB cable (iPhone 5th Generation or higher cable) provided in the box. 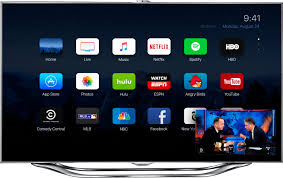 So, on face value the 4th Generation Apple TV seems to be far superior to the old Apple TV. It’s intuitive, uncomplicated, and systematically thoughtful. Think – Apple’s great design again. Only time will tell how much of a monumental product this is, however it is fair to say that this may be the beginning of the future of TV.